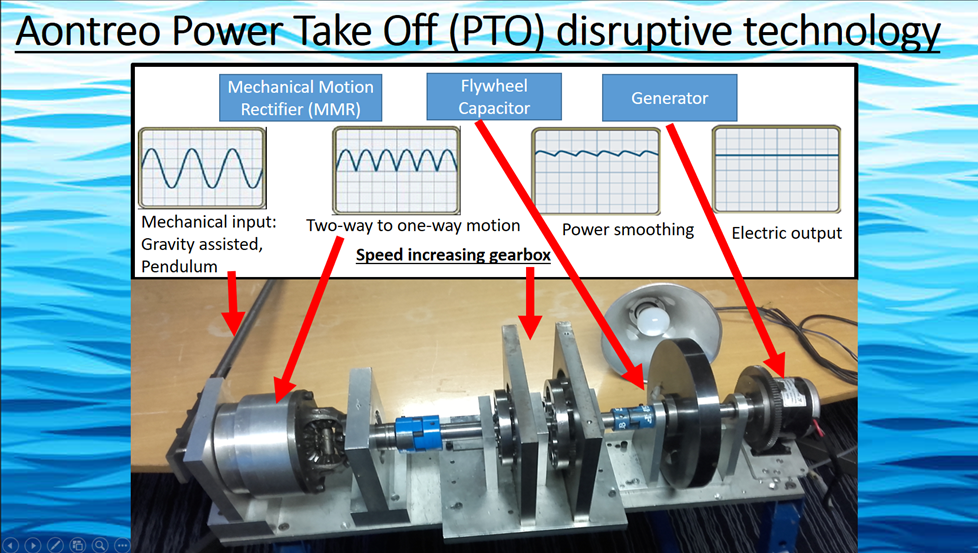 Posted at 19:46h in Blog, Selkie Network by admin

Limerick Wave’s mission is to turn the mechanical power of the waves into electrical power for general consumption. Limerick Wave Ltd. has developed an innovative Power Take Off (PTO) technology called Aontreo. The use of the PTO technology in this area is novel in that its rotation is uni-directional despite the bi-directional natural oscillation of the flotation device. (Patent Application No. 10723800.8 •Patent Grant No. 2425123)

The Aontreo PTO is a Mechanical Motion Rectifier (MMR) that seamlessly turns the bi-directional natural oscillation of a WEC flotation device into uni-directional rotation to turn an electrical generator.

What is unique and novel about the Aontreo PTO?

Selkie have supported Limerick Wave through its webinars, workshops and networking sessions in letting developers in this sector to know about our PTO technology.

1. The mechanical input will be gravity assisted pendulum two-way motion.

2. The two-way motion will be turned into one-way by the mechanical motion rectifier (MMR).

3. The one-way motion speed will be increased by a gearbox.

4. The rotational energy will be stored in a flywheel for power smoothing.

5. The rotational motion will spin a generator to produce electricity.