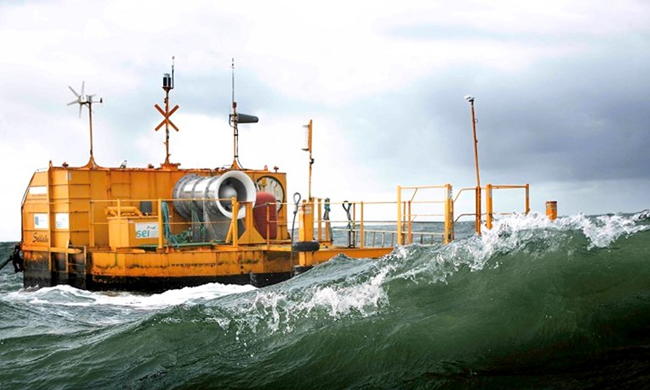 The SELKIE cross-border project aiming to boost the marine energy industry in Wales and Ireland has announced that Ocean Energy is the successful wave energy company following a tender call for participation in a pilot demonstration project.

Ocean Energy is a wave energy technology developer based in Cobh, Ireland. Ocean Energy has been following a careful technology development route resulting in a device of robust and practical design, with one moving part out of the sea-water. Early TRLs were covered through tank tests in Cork and Nantes. The progression up the TRL levels resulted in over 3 years of successful live sea trials at the Galway Bay Test Site resulting in proven survivability for the device.

Ocean Energy have recently completed the fabrication of the OE35 device, rated at 500kW, for deployment at the US Navy Test Site in Oahu, Hawaii. This device has been delivered to Hawaii and will be deployed at the test site for 12 months.

SELKIE is bringing together leading researchers and businesses to improve the performance of marine energy devices and technologies. University College Cork are leading the project in partnership with Swansea University, Marine Energy Wales, Menter Môn, DP Energy Ireland and Gavin and Doherty Geosolutions. The project is funded by the European Regional Development Fund through the Ireland Wales Cooperation programme.   The project is developing a streamlined commercialisation pathway for the marine energy industry by establishing a cross-border network of developers and supply chain companies in Ireland and Wales. Multi-use technology tools, templates, standards and models are being created for use across the sector in Wales and Ireland.

SELKIE will test and validate the technology tools on two pilot demonstration technologies; one wave and one tidal. Using a structured development path, the pilot testing will advance the knowledge and improvement of marine energy devices in terms of their reliability, survivability, operability, stability and commercial viability.

The Selkie Project is looking forward to working with Ocean Energy to validate the tools developed during the project.

Gordon Dalton, Selkie Project Coordinator said: “The Selkie Project is confident that Ocean Energy company participation, as lead wave energy pilot in the Selkie project, will significantly benefit Ocean Energy company in its road to commercialisation. Selkie will tailor its suite of tools to the wave energy sector needs and requirements, worth up to €4million in EC contribution.”

Professor Tony Lewis, Chief Technology Officer of OceanEnergy said: “Ocean Energy is delighted to be part of the Selkie project and actively collaborating with the industry’s leading research institutes and commercial partners. The participation of industry in this project will help to deliver a smoother commercialisation pathway by combining expertise, and critically, operational experience to validate the tools produced within the project.

He further stated that “Being Welsh, I am particularly delighted that we are part of this unique collaboration between Wales and Ireland – both of whom have significant marine energy resources.”